2019 Governor's Awards for Excellence in the Arts 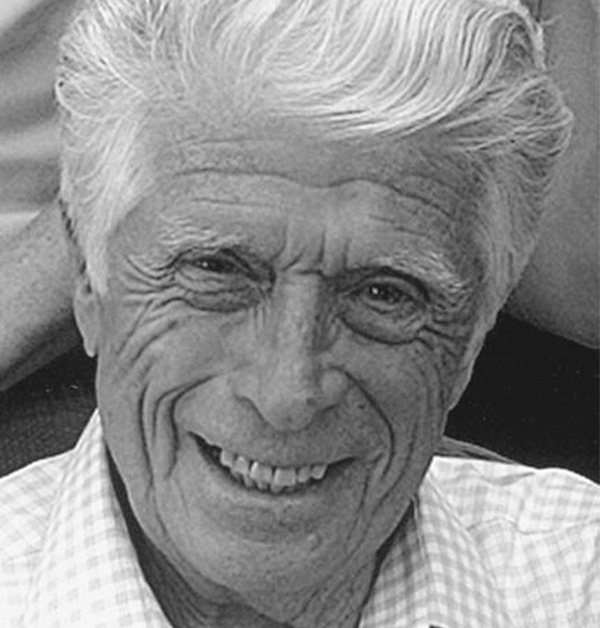 Victor di Suvero (Santa Fe) - Individual Artist: Victor di Suvero has been an outspoken literacy, literature and poetry activist since he first began studying and memorizing Dante at the age of ten. He has participated in bringing poetry and literature to the people for nearly 80 years in his role as poet, publisher and community organizer. His more recent poetry books include Harvest Time (2001), Spring Again (2005), Moving On (2007), A Gathering (2010), Considering (2012), Still Here (2014), and Once Again (2016). Spring Again was awarded the Independent Publishers Association Bronze Medal in 2007. He has edited several anthologies including ¡Saludos!, the first bilingual collection of the poetry of New Mexico, and We Came to Santa Fe (2009), which was awarded a 2009 Southwest Book Design and Production Award by the New Mexico Book Association. Through his publishing company, Pennywhistle Press, which he established with his wife, di Suvero has consistently published the work of many unknown New Mexico writers from small communities whose talents would have gone unnoticed without his support. Those writers include the likes of Joan Logghe, Renée Gregorio, John Brandi, Judyth Hill, and Luci Tapahanso, all now well-known New Mexico writers. di Suvero was a key force in founding several important and long-standing literary organizations and programs in New Mexico including the Poetry in the Schools program, New Mexico Book Association, PEN New Mexico, New Mexico Literary Arts (formerly The Poetry Center of New Mexico), and the Live Poets Society. As the Director of the National Poetry Association he assisted in establishing National Poetry Week, which has now grown into National Poetry Month and celebrated across the country. 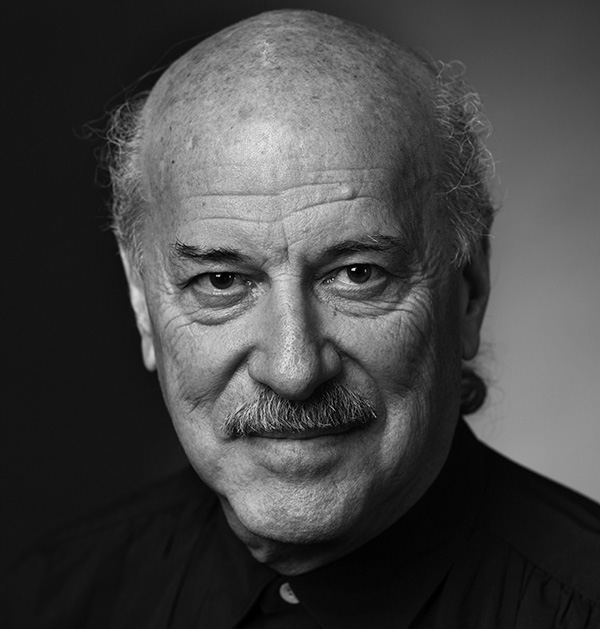 Marc Neikrug (Santa Fe) - Individual Artist: Marc Neikrug's musical career has spanned over 54 years as a globally recognized concert pianist, composer, and artistic director of the Santa Fe Chamber Music Festival. As a pianist, he performed as a soloist, a chamber musician, and most notably as a duo partner with the violinist Pinchas Zuckerman for over 35 years. Together they performed in North and South America, Europe, Asia and the Middle East in concert halls such as Carnegie Hall and Lincoln Center. His performances with Mr. Zuckerman have been recorded in over 20 CDs and performances broadcast on German, Swiss, English, and Japanese stations as well as on PBS. As a composer, major pieces were commissioned by the Berlin Opera, London's South Bank Festival, the Frankfurt Festival, the Polish Radio Symphony, the Library of Congress, Lincoln Center, and the Atlanta, Houston, Pittsburgh, Milwaukee, Boston, Washington National, and Jerusalem symphonies. He has written five pieces on commission for the New York Philharmonic and G. Schirmer has published over 60 of his works. Since 1998, Neikrug has been the Artistic Director of the Santa Fe Chamber Music Festival. Its annual season of 45 concerts features nearly 100 musicians from all over the world and the festival's three-month series of radio shows is broadcast by over 200 stations. He developed major educational components to the Festival that brings curriculum, teacher training, and performances to 6,000 elementary students as well as pre-K students through the Music in Our Schools program. 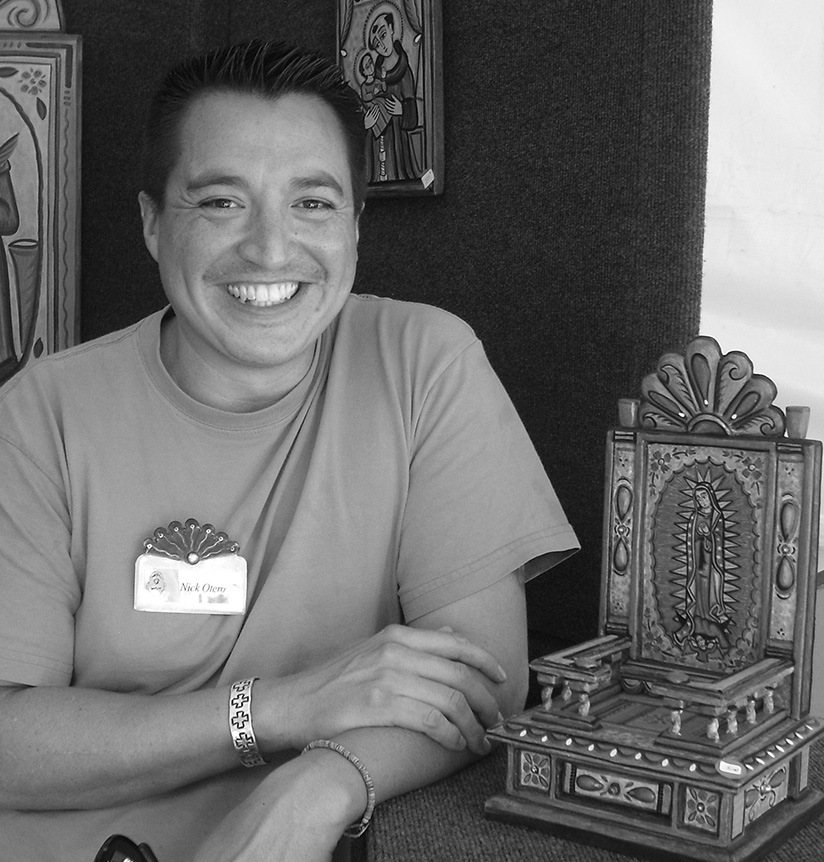 Nicholas Otero (Los Lunas) - Individual Artist: Nicolas Otero began practicing the tradition of Santo making at just 16 years old by apprenticing with master artists. Otero produces retablos, bultos, altars, gesso reliefs, hide paintings and ramilletes (paper flower adornments). He continues to use traditional methods in his work such as the production of natural pigments and hand carved panels. In his 22 years of practicing the Santero tradition he has garnered over 42 awards including, in 2017, Grand Prize Best of Show for Traditional Spanish Market. Working within his community of artistic colleagues, he curated the exhibit Ayer, Hoy, y Manaña/ Yesterday, Today, and Tomorrow: An Exhibition of Traditional and Contemporary Arts, at the Los Lunas Museum of Heritage and Arts that was noted for its power, authenticity, and meaningful community engagement. Otero's work can be found in the museum collections of the Denver Art Museum, Regis University Museum, Taylor Museum, Museum of Spanish Colonial Art, College of Saint Catherine, Colorado University Art Museum, Albuquerque Museum of Art and History, Denver Museum of Nature and Science, Museum of International Folk Art and the Archive Collection of the White House. 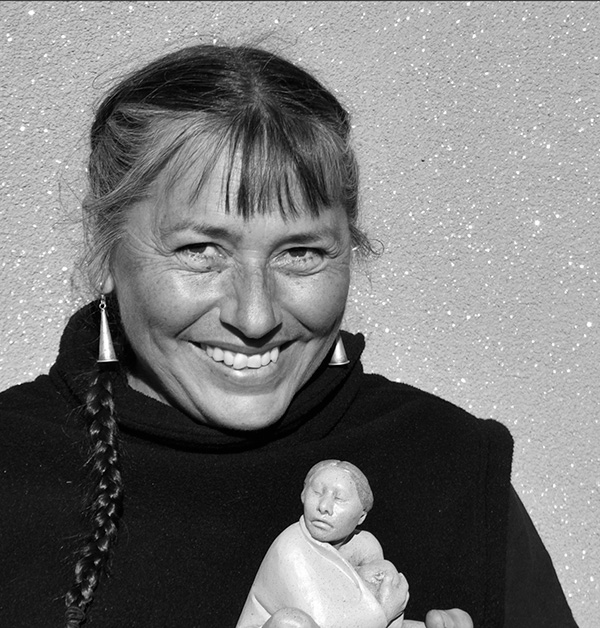 Roxanne Swentzell (Santa Clara Pueblo) - Individual Artist: Roxanne Swentzell's first piece of art was a clay dog at the age of four. After formal training at the Portland Museum Art School and the Institute for American Indian Arts and the development of her own style, Swentzell began to create full-length clay figures that represent the complete spectrum of the human spirit. She feels that many people are out of touch with their environment and hopes relating to her expressive characters will help them get back in touch with their surroundings and feelings. Her figures represent a full range of emotions and irrepressible moods. Swentzell often focuses on interpretative female portraits attempting to bring back the balance of power between the male and female, inherently recognized in her own culture. Additionally, she increasingly uses a powerful sense of humor to communicate. Though steeped in her own culture, Swentzell's work demonstrates an astounding universality, speaking to people of all cultures. Awards for her work include the Spirit of the Heard Award (Heard Museum, Phoenix, AZ), the Native Treasures Living Treasures Award (Santa Fe), a Santa Fe Community Foundation Award, and awards for specific work from the Southwest Association of Indian Arts Indian Market and the Heard Museum Guild Indian Fair and Market. Her piece, "E-wah-Nee-nee" was commissioned for their auditorium by the National Museum of the American Indian (NMAI), Smithsonian Institute, in Washington, DC. Her work is continuously shown in the Tower Gallery in Pojoaque. 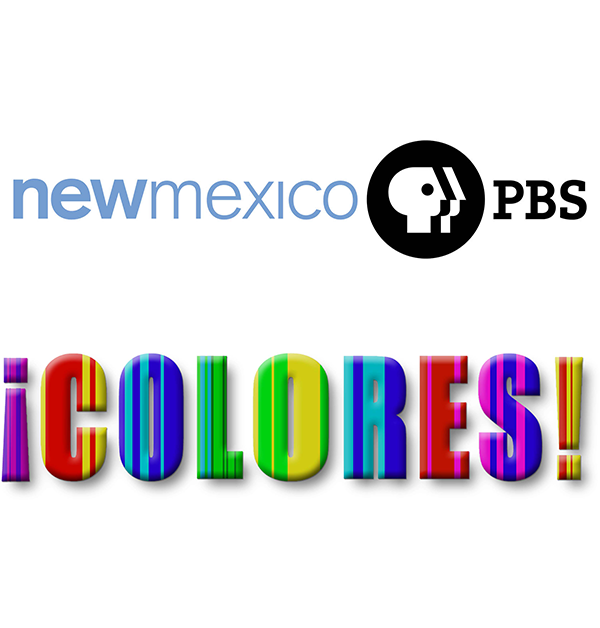 New Mexico PBS/KNME ¡COLORES! (Albuquerque) - Major Contributor to the Arts: Non-commercial, educational, and inspirational, ¡COLORES! is dedicated to telling stories about the remarkable creative spirit, the rich multicultural communities, and extraordinary history found in the Land of Enchantment. It is a weekly art series that features local and national stories about film, visual and performing arts, theater, photography, literature, painting, sculpture, poetry and dance. Since 1989 they have produced over three hundred thirty-minute and one-hour programs. Featured artists include Arlene Cisneros Sena, Allan Houser, Rudolfo Anaya, Judy Chicago, Nicholas Herrera, Elodie Holmes, Peter Hurd, and Georgia O'Keeffe. Through a variety of media platforms, ¡COLORES! brings New Mexico's art, culture, and history to households across New Mexico, the US and the world. With broadcasting and cable they reach over one million homes throughout the state. Available via the internet, the series can be viewed from anywhere. Its programs have been included in museums across the country, at community events, and in classrooms from elementary school to higher education. ¡COLORES! has received a National Emmy nomination for Community Service, several southwest regional Emmys, the Jury Prize at the Telluride Mountain Film Festival, and a showing at the Smithsonian's Latino Film Festival. 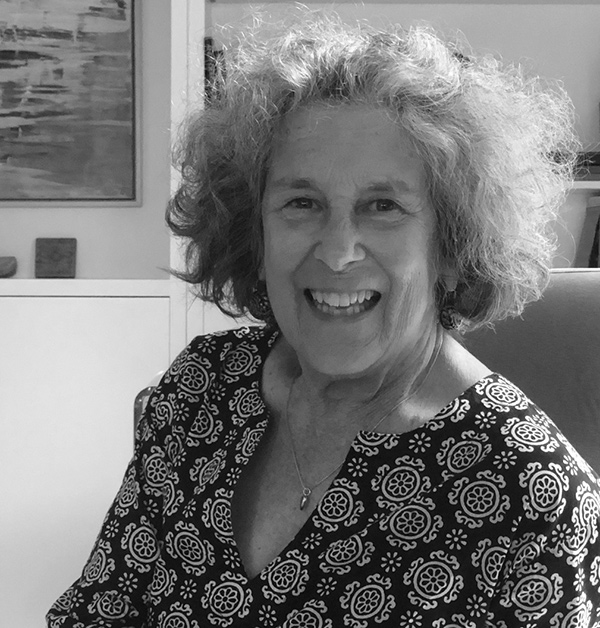 Lee Gruber (Silver City) - Individual Contributor to the Arts: Lee Gruber has been a major force in her community through initiating ideas and shepherding them to reach goals that promote contemporary visual art, foster an understanding of the history of New Mexico cultural arts, and nurture an environment that will economically support the business of art. Gruber founded the Silver City tile business Syzygy with her husband over 25 years ago. Though she recently retired, Syzygy continues to thrive making architectural ceramics whose production process embraces technology for building construction worldwide while maintaining an artistic sensibility. The company's many actions as part of their community include donating an estimated $50,000 of materials over 20 years to local organizations and projects. As board president of the Southwest New Mexico Arts Culture and Tourism, Gruber led the establishment of the Silver City Arts & Cultural District, where she was board president. Through her vision were established both the Silver City Clay Festival and the Southwest New Mexico Clay Arts Trail. The Clay Festival has evolved into a national event of exhibitions, workshops, and demonstrations. The Clay Trail, begun in 2013, has grown to 60-70 member sites in Luna, Hidalgo, Grant, and Catron counties. It also partners with historic sites related to clay such as the Gila Cliff Dwellings and the Mimbres Cultural Center.